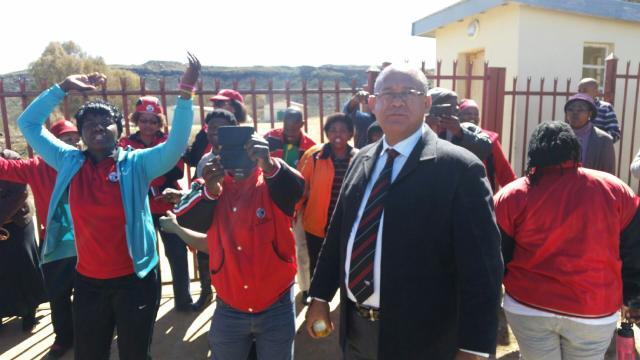 DA Shadow MEC for Education, Edmund van Vuuren, in front of the Sterkspruit Secondary School, where the legislature portfolio committee on education was prevented from entering the school by members of teachers union SADTU on Tuesday.

Today members of the legislature’s Portfolio Committee on Education were again prevented from doing site visits at schools in the Sterkspruit education district by members of the South African Democratic Teachers Union (Sadtu).

Anarchy is prevalent in this district and learners are being used as canon-fodder by union members to fight their battle with the Eastern Cape Department of Education. Principals and staff at schools were intimidated and threatened to the extent that they were too scared to unlock gates or to come out of their offices to meet with portfolio committee members.

The union has shown its lack of respect for the rule of law. Union members clearly do not have any desire to put the education of our children first by finding solutions to the plethora of problems at our schools.

If the union has issues with the MEC, take it up with the MEC in a manner that does not include the disruption of schools or the work of the portfolio committee.

Members of the legislature have a mandate to go out and do site visits to listen and learn first-hand of the issues that affect the electorate.  Sadtu’s actions this week robbed principals, educators and learners in the Sterkspruit district of the opportunity to highlight their specific needs to a legislature forum that can engage directly with the Department of Education.

Efforts to put stop the further deterioration of the administration of the department should be foremost on the minds of those who have the God-given opportunity to be a part of shaping the futures of our children. Shame on you Sadtu. Shame on you.