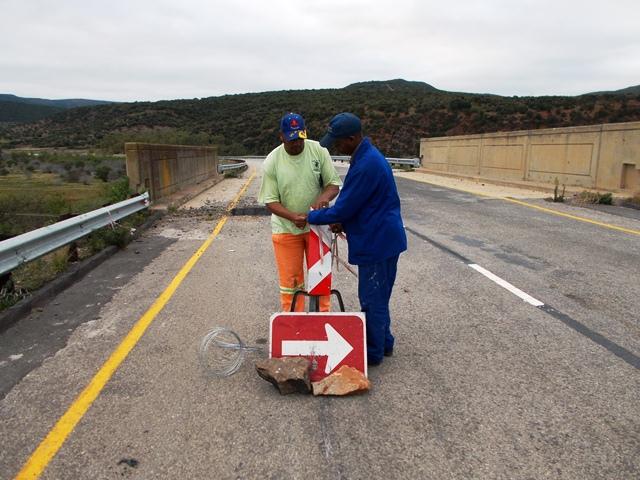 Alicedale residents Ricardo Keyster and Simphiwo Sam erect a makeshift sign to warn motorists of potholes in the road to the village. 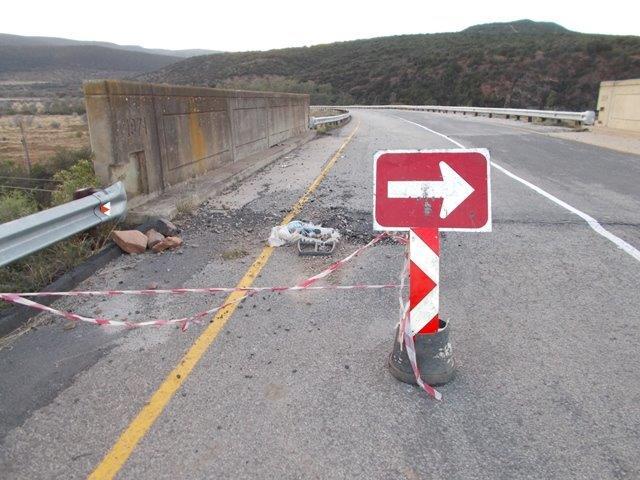 A 16km district road, which had been tarred at a cost of R112 million is in such a state of disrepair that residents have been putting up makeshift signs around the potholes and broken verges to warn motorists of the danger.

However, according to Roads and Public Works MEC Tandiswa Marawu, the road “has not deteriorated at all” and is “very safe for the public”.

A proper road network is the economic life blood of rural Eastern Cape towns that rely on tourism and agriculture to survive.   The MEC and her officials have either been misled or they are simply unconcerned.

With an unemployment rate estimated to be 85% a good road would open up Alicedale, the nearby golf resort and game farms to the potential of investment, and thus job creation for the 5 000 residents of the town.

According to Reply to question 72 from the MEC to a legislature question, the tarring of the MR 476, which links Alicedale to the N10 to Paterson, started in 2007 as a 2010 Soccer World Cup initiative but is yet to be completed, seven years later.   An amount of R112 million had been spent to date on 16km of surfaced road, fencing and 75% completed side drains with sub soil pipes.

The MEC gave the assurance that the road is in safe condition for public use with temporary road signage and -marking as well as monthly inspections.  Feedback from Alicedale residents however proves contrary to the MEC’s response

This scenario is a sad but realistic reflection of the poor management of government departments in the Eastern Cape where all too often the one hand does not know what the other is doing.

What is needed is strong leadership to ensure that service delivery projects are successful.  This can only be achieved through proper management, monitoring and accountability.   We cannot allow that millions of tax rands are wasted on projects that bare so little value for money.

I have written to the MEC to inform her about the true facts regarding the MR 476.  I have also requested that this matter be discussed at the next meeting of the legislature’s portfolio committee on roads and public works.