MEC must answer for neglect of Cradock Four memorial site 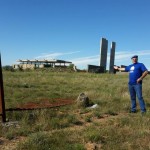 The DA has submitted formal questions to Bhisho about the neglected state of the memorial in honour of the famous Cradock Four.   For a picture, click here.

I have received various complaints regarding the worrying state of vandalism at the memorial.  I visited the memorial last week and was saddened by the state of neglect.

One needs to question what the ANC government is going to do about the bad state of this national asset.

I have requested my colleague, DA shadow MEC for Arts, Sport and Culture, Ross Purdon MPL, to take up the matter with the current MEC, Pemmy Majodina, as to the cost of damages and what will be done to repair it and how the memorial will be protected in future

Under a DA government we will empower civil society to nurture and conserve their heritage resources so that they may be bequeathed to future generations.

We need to respect all historical monuments.