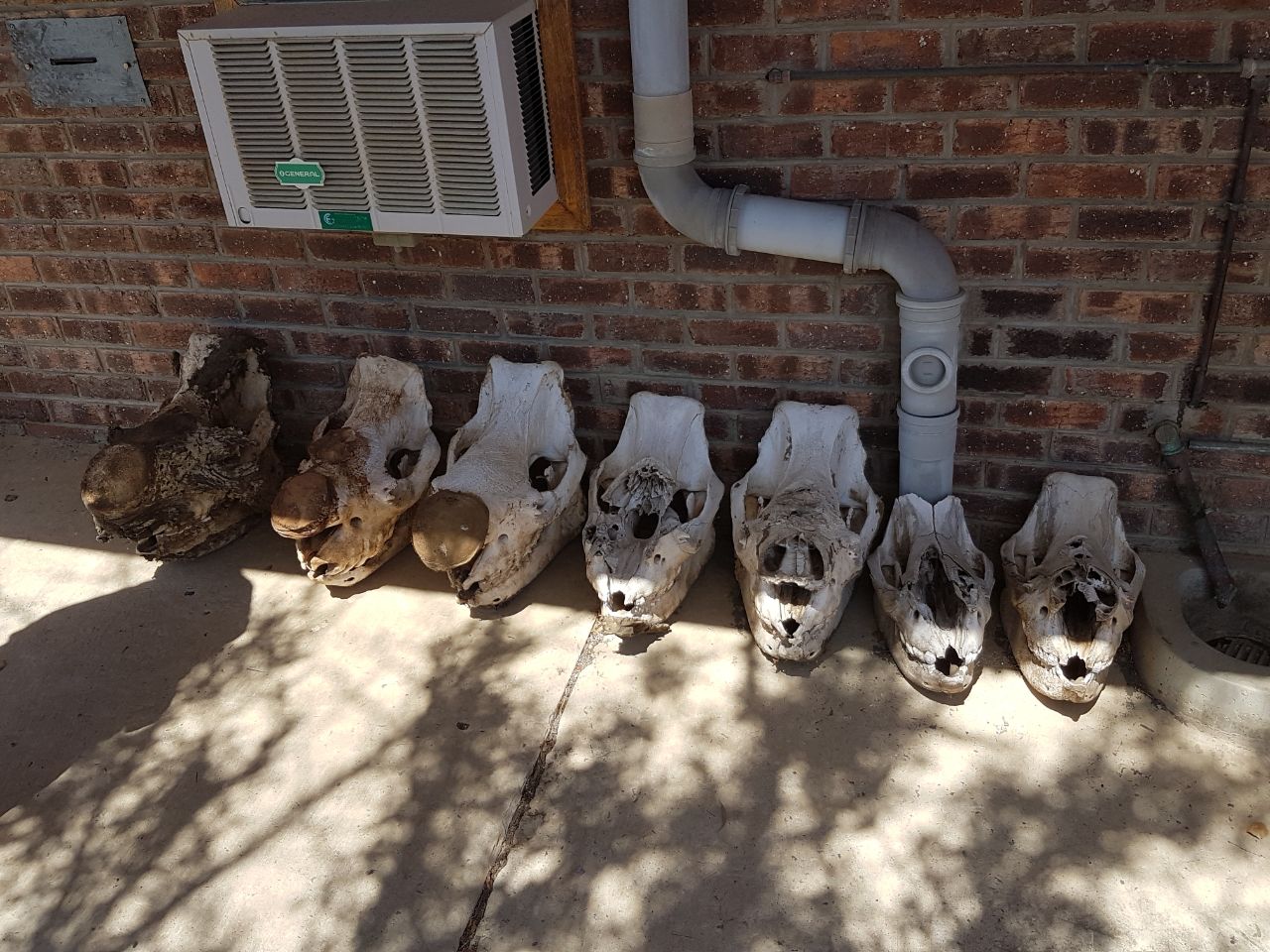 Skulls of the seven rhinos poached in the Double Drift Nature Reserve tells the sad story of the challenges facing game parks in the Eastern Cape.

The Eastern Cape Province of South Africa is home to several provincial nature reserves which are spread across the province and represent a broad range of natural biomes.

This province boasts an extraordinary aquatic and terrestrial biodiversity which, if unlocked and managed properly, could result in a huge increase in tourist numbers to our province. This, in turn, would substantially enhance revenue into our depleted coffers and create the jobs which are so desperately needed.

But we must be careful of our words. We must be very careful about when we say things and in particular, why we say things, especially if these things are promises. It was Joe Moore who said, and I quote, “You cannot trust a promise someone makes while they’re drunk, in love, hungry or running for political office”- end quote.

Let me elucidate: Our honourable Premier, and our Honourable MEC for Finance, when making their respective speeches earlier this year, both mentioned that in addressing the triple challenges of poverty, unemployment and inequality, a provincial strategy has been developed that is based on six economic sectors, one of which is the oceans economy. The MEC went further to say that the radical economic transformation required in the province will, and I quote, ”be based on inclusivity and bring on board every community in our province”- end quote.

Madam Speaker, through you, I would want to ask whether these communities were invited to the recent function in Port Elizabeth, where the sale of Eyethu Fishing Company shares was being celebrated with many political leaders allegedly in attendance?

Perhaps they were left off the invitation list because there they would have witnessed that those shares were not sold to, or secured for, local SMME’s, or for that matter, a young black entrepreneur, or even a cooperative of previously unemployed black women – no, despite all  the political rhetoric, those shares were sold to a Spanish company. Now, Madam Speaker, the last time I checked, Spain did not form part of this province and was certainly not part of the radical economic transformation agenda. Last time I checked, Spain had the dubious reputation of being historically one of the largest colonisers of vast tracts of the planet, in order to secure raw materials to boost their OWN economy. I wonder what incentive was on offer to secure those shares? No doubt we will find out in due course. What a wasted opportunity for people of this province.

Madam Speaker, we must be careful of our words.

In particular, we must be very careful of promises made when setting up agreements with local and traditional communities in and around our provincial parks. Scales of benefit and the number of jobs to be created for community members are not just random numbers that can be adjusted when the economy stalls. The number of jobs offered to a community must be sustainable, and negotiated agreements must never be reneged upon, if the ECPTA wishes to build lasting and mutually beneficial relationships with communities.

Madam Speaker, our provincial parks are in a bad way. In short, they are falling apart. This is tragic, as I will always maintain that we have so much more to offer in our province than in any other province in the country. But, Madam Speaker – all is not lost. For failing businesses, failing entities, and failing economic transformation agendas, there is always a turnaround strategy, In this case, it is a six point plan. Before mentioning the plan, however, there is the small matter of the annual DEDEAT budget, and it would be remiss of me to discuss a plan without having first raised my concerns regarding the budget:

I appreciate the complexities of the DEDEAT budget, particularly with regard to the many parts that make up the whole. I particularly appreciate that economic development is a key focus area, BUT…. Madam Speaker, we cannot continue to throw vast amounts of money at developing businesses, many of which fail repeatedly, at the expense of our natural environment, and the Directorate of Environmental Affairs, which warrants a paltry 0,14% of the provincial fiscus. I wish to draw the following comparison and please forgive me, Madam Speaker, for being somewhat pedantic:

The Economic Development part of the budget is like a beautiful sports car which is under construction. Every part of the car needs to be designed, moulded, crafted and fitted perfectly. Once assembled correctly, the car will move…but the car is not going anywhere for a long time, as the parts are still being designed.

The Environmental Affairs and tourism part of the budget is like a car too. This car, however, is already working, and the engine is sound, but it has flat tyres. These tyres are expensive to replace, but if you invest in new tyres, you will be on the road by tomorrow morning. In the meantime, however, the environmental integrity of our province is under severe threat, and without a decent budget, don’t expect tyres on your car anytime soon.

So Madam Speaker, we need to invest more heavily in the economic areas which will float our economy and create sustainable jobs faster and more effectively. In this case, the areas are environmental affairs and tourism. This, in turn, will support other sectors of the economy and the spillover effect will be felt across the province. And now for the turnaround strategy:

If communities don’t yet understand the full value of Marine Protected Area’s and how these can provide them with sustainable resources, educate and empower them.

Madam Speaker, there is a global trend amongst avid fishermen to participate in catch and release angling, as the threat of extinction hangs over many of our marine and fresh water species. Catch and release sanctuaries, where anglers are accompanied by a guide and a gilly, and all fish caught are returned to the sea, are becoming popular. High-end anglers pay a lot of money for the privilege of catching fish because they are almost guaranteed of doing so, when in an area of zero take off. Think of the jobs this approach could create!

Criminal environmental activity, whether it is illegal sand mining, take off from an MPA, illegal poaching of our rhino’s or any other transgression, must face the full might of the law. For this, sufficient law enforcement officers are required – these jobs are sustainable! But where is the budget? Excellent environmental governance is crucial to our province’s future.

Marketing: Once management and maintenance are taken care of, we must actively market the province on every possible platform, particularly on social media and at Tourism Indabas, locally and internationally. There is so much here that is attractive to tourists.

Access: Parks must be both physically and financially accessible. Nobody can enjoy what they either cannot reach or cannot afford.

Showcase our heritage: Those of us living here are privileged to experience the rich cultural heritage of the AmaXhosa. Tourists want that experience too and are prepared to pay good money for the experience.

Madam Speaker, the time for promises is over. I will not distress you with the Democratic Alliances successes in growing the economy where they govern, suffice to say that there is far less talk and far more action. The growing numbers of jobs and shrinking unemployment figures are evidence enough.

It is now time for action in the Eastern Cape. The ECPTA has in its hands, a golden opportunity to create a thriving and vibrant tourist industry in our province and convert promises into real jobs. No more words, just actions. AND a decent environmental budget. I close with a quote from Vince Lombardi. Who said, “The measure of who we are, is what we do with what we have. Close quote.

I thank you all.