Speech notes by Vicky Knoetze MPL – Debate on motion to investigate the implementation of plastic roads by the Department of Roads and Public Works. Eastern Cape Provincial Legislature, 16 August 2017. 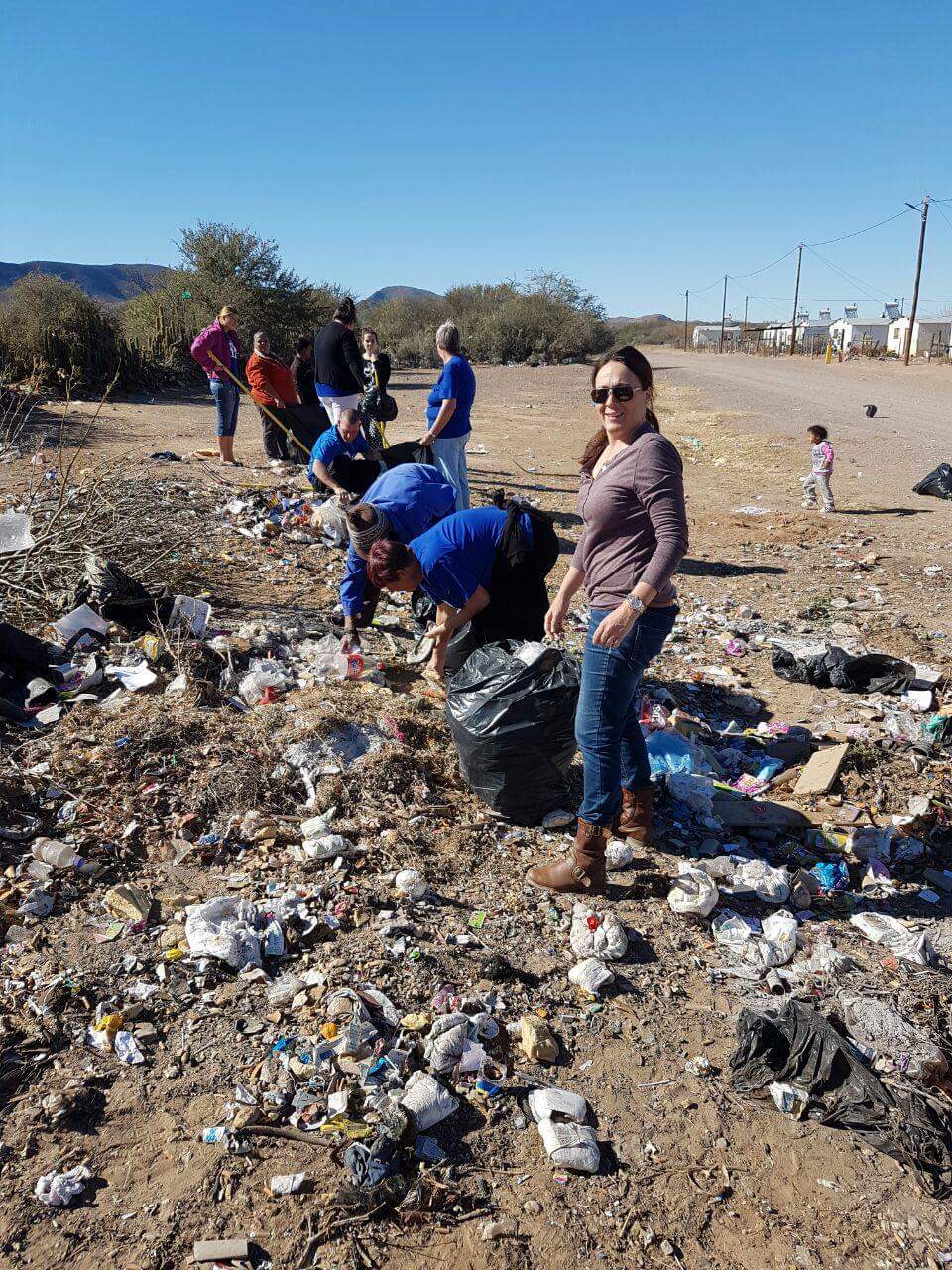 Vicky Knoetze MPL on a recent cleanup operation which included waste-plastic in Klipplaat in the Beyers Naude Constituency.

The Eastern Cape could be the first province in South Africa to launch a plastic road pilot project. This motion to investigate the feasibility of rolling out a pilot project for the implementation of plastic roads in the province can be ground-breaking.

The idea of plastic roads was first conceived by looking at the problems that municipalities, provinces and countries face as a whole in dealing with road issues. These include deterioration, high-costs as well as societal problems such as plastic waste, extreme precipitation, consolidation of the subsoil, an increasing need for mobility, and a crowded subsurface. The solution to these problems, replace bitumen with waste plastic.

But what does it mean to build a road using plastic?

There are over 40 million kilometres of road in the world made from hundreds of thousands of barrels of oil. Normally roads comprise of a mix of rocks, sand, limestone and 10% bitumen which is extracted from crude oil.

Waste plastic can replace a significant part of the bitumen. Waste plastic includes normal household waste as well as commercial waste most of which ends up in landfills and our oceans.

It is made from recycled plastic, has a significantly smaller carbon footprint compared to conventional road structures.

Its expected lifespan is three times longer than that of a conventional road, the expected construction time is 70% faster, and can cut construction cost up to 50%. It is environmentally friendly and sustainable. Little to no maintenance is required, material is virtually impervious to conditions such as severe weather and water and heat.

Roads that are manufactured from recycled plastic in place of bitumen, which is extracted from crude oil have proved to be cheaper and more durable than asphalt-based roads. These roads have also proved to lessen tyre resistance and could even increase fuel economy. Plastic roads uses the equivalent of 1 million plastic bags per kilometre and estimates show that the material will cost up to 8% less than that of a conventional road and that it could reduce the overall construction costs by up to 50%.

According to a company in the Netherlands, these plastic roads will be able to sustain temperatures of -40 degrees Celsius to 80 degrees Celsius. It is estimated that a plastic road could last as long as 3 times that of a conventional asphalt-based road and would require much less maintenance. These roads are currently being implemented in Rotterdam, India and most recently in Great Britain. Cumbria was the first municipal council in the UK to pilot this innovation. India already has more than 21 000 miles of plastic roads, mostly in rural areas. These roads have not shown any signs of cracks, potholes or edge flaws.

BENEFIT 1: JOB CREATION: Plastic-bitumen composite roads increases the reuse of plastic. The segregation process is labor-intensive with no easy solution. As for the Department, thousands of jobs can be created through the Expanded Public Works Programmes for the sorting of waste plastic to be used for roads construction.

Thousands of other jobs could also be created by small businesses in this regard.

These roads are made from recycled plastics, and the first step in constructing them is to collect and manage the plastic material. The plastics involved in building these roads consists mainly of common post-consumer products such as product packaging. These materials are first sorted from plastic waste. After sorting, the material is cleaned, dried, and shredded. The shredded plastic is mixed and melted.

BENEFIT 2: ADDRESSING THE WASTE PLASTIC EPIDEMIC: Most plastic waste is not recycled because it is usually mixed with different types of plastic and non-plastic (e.g. paper labels). This initiative will also be an incentive to the public to rather recycle plastic and be a massive leap forward in preventing plastic ending up in landfills and in our oceans.

They do not absorb water, have better flexibility which results in less rutting and less need for repair. Road surfaces remain smooth, are lower maintenance, and absorb sound better and using recycled, post-consumer plastics is cheaper than using asphalt.

BENEFIT 4: ENVIRONMENTALLY MORE SUSTAINABLE: The use of plastic in road construction reduces the amount of asphalt (bitumen) used. This is beneficial to the environment since asphalt is responsible for a large amount of global carbon emissions. The addition of plastic in asphalt can reduce the viscosity of the mix. This allows a lower working temperature, which lowers CO emissions.

BENEFIT 5: ADDRESSING THE BACKLOG: The current backlog of roads in the Eastern Cape is standing at over a R100 billion and growing every day. Roads are deteriorating faster than they can be maintained and rural communities remain cut-off from schools, hospitals and economic opportunities. The Department of Roads and Public Works has also recently been the subject of a new legal precedent due to the fact that the Department was taken to court by AgriEC for failure to maintain farm roads in the province.

BENEFIT 6: The concept even offers opportunities for further innovations such as solar heating and electricity solutions and it confronts the problem of waste plastic.

Honourable Speaker, South Africa faces a situation currently off a negative growth rate, on the back of a seven-year period of very low growth, ending 2016 with a growth rate of only 0.3%. According to the World Bank the reason for South Africa’s poor economic performance can be attributed to a number of key development challenges including poverty, policy uncertainty, inequality and poor infrastructure.

The poor state of the South African economy can largely be attributed to persistent and significant infrastructure constraints. These include a poor and deteriorating roads network. This lack of capacity has proved to be hugely detrimental to the economy. The issue in terms of poor infrastructure or infrastructure constraints seems to manifest itself in the cost of production as it is driven higher. This, in turn, contributes to a loss of international competitiveness and restricts private investment.

When he was Minister of Public Enterprises in 2013, Malusi Gigaba said that a lack of infrastructure is negatively affecting trade. He further stated that:

“…the world is eager to do business with Africa, but finds it difficult to access African markets, especially in the interior, due to poor infrastructure… greater economic activity, enhanced efficiency and increased competitiveness are hampered by inadequate transport infrastructure”.

He further said that while inadequate infrastructure could be the biggest threat to Africa’s long-term growth, it also represented a significant opportunity for investors.

At this point it must be acknowledged that South Africa has made major strides in terms of basic infrastructure provision since the country became a democracy after an era of apartheid in 1994. It must, however, be understood that post-apartheid South Africa has been left with a legacy of poor service delivery and infrastructure backlogs. Another factor that played a role was what is referred to as the ‘urbanisation of poverty’.

To understand the rate of urbanisation in South Africa, it is first necessary to look at the rate of population growth. According to DBSA (2012:268), population growth was at its highest between 1996 and 2001 and slightly lower between 2001 and 2007. Average annual population growth between 2001 and 2009 was at 2% or more for the Western Cape, 1% in Gauteng, and less in all the other provinces, as people migrated to the metropolitan municipalities in search of employment opportunities. This had a major impact on the ability of the state to deliver services, as it had to accommodate significantly more households than in the past (DBSA 2012:273).

It can, therefore, be seen that one of the reasons for the high expenditure on infrastructure without the resultant economic growth can be attributed to the fact that South Africa is still dealing with the historic infrastructure backlogs and has not yet reached a tipping point in terms of real progress or growth.

Resolving the dilemma created by the historical backlogs and the poor condition of infrastructure is a sensitive balancing act. Because of limited resources, it will be necessary to improve the capacity to develop integrated infrastructure plans over the medium to long term to resolve this planning predicament. The challenge will be to balance the network and social infrastructure backlogs facing vulnerable and excluded communities with infrastructure that stimulates economic growth, grows the economy, increases opportunities, and reduces the cost of doing business (DBSA 2012:273).

Furthermore, a leading author in the field of public administration (Palmer 2016):

“… closing the ‘infrastructure gap’ entails more than simply increasing new public investment. The failure to address this ‘recurrent cost’, or the problem of deficient operation and maintenance expenditure, will have powerful macroeconomic consequences, especially for the sustainability of growth and jobs. The responsibility for investing in new and existing infrastructure is a concurrent function”.

South Africa has various policies and committees in place to ensure and guide infrastructure delivery. These policies and committees include the Constitution of the Republic of South Africa, the National Development Plan – Vision 2030, the National Infrastructure Plan, the Presidential Infrastructure Coordinating Committee, and the New Growth Path. Although it is important that effective infrastructure investment is catered for in such a wide variety of policy documents in South Africa, the question arises as to whether this fact may be contributing to a lack of focus, direction, policy implementation and policy coherence when it comes to effective infrastructure investment and resultant economic growth and job creation.

It would appear from the above that infrastructure will be able to be adequately funded and feasible only when South Africa has achieved increased and competitive economic growth, which means that other ways to increase economic growth may have to be the focus point for the time being. It is, therefore, necessary to look at other initiatives to grow the economy from a national and international perspective.

There are over 77 000km of provincial roads in the Province of which 60 000 km are in rural areas. The Eastern Cape is further notorious for being the province where the cost of roads per kilometre is the highest at around R10 to R20 million per kilometre to upgrade a road from gravel to tar, and the cost for re-gravelling a road will cost in the vicinity of R 500 000. The implementation of innovative solutions such as ‘Plastic Roads’ could be the saving grace of backlogs and a deteriorating roads network in the Province specifically and in South Africa in general.

The Democratic Alliance believes that the time has come to think outside of the box and attempt more innovative solutions to modern day problems. We believe that the Eastern Cape must be at the forefront of this innovation.

The call for new, innovative ideas to solve issues such as the R 100 Billion back-log on roads, the fast deteriorating roads network, solutions to rural road networks, the war on waste and job creation can be answered.