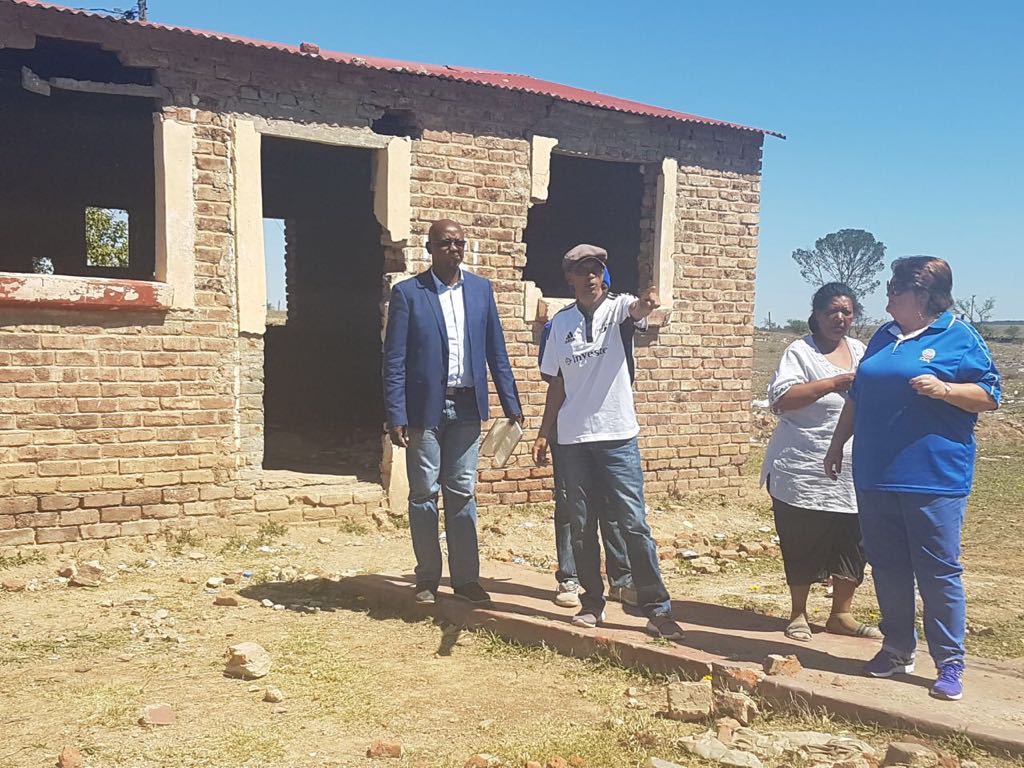 DA Shadow MEC for Human Settlements, Sanele Magaqa MPL, on a recent oversight visit to a housing project in Bedford.

There are 258 RDP houses in the province that have remained unoccupied for years. It is inhumane to allow houses to stand vacant while thousands of families live in horrific conditions. The Eastern Cape has is a backlog of over 600 000 houses. Poor planning of this sort does little to tackle the ever-increasing problem of informal settlements.

In a reply to a legislature question I asked the MEC for Human Settlements, Helen Sauls-August, she said houses had been standing empty for eight years in two towns – 25 in Jamestown in Walter Sisulu Municipality and another 79 in Ugie in the Elundini Municipality. In Potsdam in the Buffalo city Metro, a total of 154 houses had been vacant since 2013. When houses are not occupied they often become vandalised and stripped resulting in fruitless and wasteful expenditure.  For the reply, click here: Reply to question 145 RDP housing and rectification

According to the MEC, this was mainly due to beneficiaries that had relocated to bigger cities in search of decent employment with their families.  What is supposed to happen, is that the beneficiary should report their pending relocation to the department so that the house can be allocated to the next beneficiary. Furthermore, the relocating beneficiary is supposed to be moved to the list of another housing project. This indicates poor planning and oversight on the part of the Department of Human Settlements.

Vacant homes due to relocating beneficiaries are part of the reason why shacks continue to mushroom close to city centres.  When a beneficiary relocates to another city in search of better employment, those people often resort back to living in informal settlements while the government-subsidised houses stand empty.

In the DA-led Western Cape, municipalities publicise beneficiary lists in at their local offices for public scrutiny. This simple step would go a long way in eradicating some of the problems experienced in the Eastern Cape.

I have written to MEC Sauls-August and to the chairperson of the legislature’s Portfolio Committee on Human Settlements, Mary Ndalangisa-Makaula, to request that communities have proper access to information about their houses by having the beneficiary lists made public.

The Democratic Alliance is committed to creating access to housing for those in need. We believe that the process needs to be speeded up. — Sanele Magaqa MPL, Shadow MEC for Human Settlements