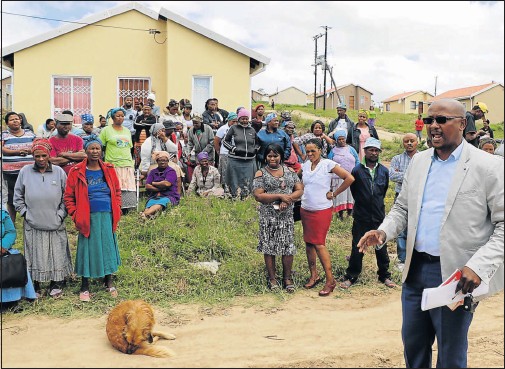 Unit P residents also told of how they had to “buy” the free government houses and how the houses had been illegally occupied.

The DA has deployed its members of parliament, who sit on the national human settlements portfolio committee, to the area to hear from residents themselves about housing projects at Buffalo City Metro.

MPs Solly Malatsi and Mbulelo Bara and DA MPL in the Bhisho Legislature Sanele Magaqa were welcomed by over 60 residents from Unit P who claimed they were victims of corruption at the hands of BCM officials, ward committee members and officials from the human settlements department.

Liziwe Gobe, 44, an unemployed mother of two, related how she was “robbed” of R15 000 by a ward committee member who promised her a house last year.

After languishing on a housing list since 1998, she was advised by other residents to speak to a certain ward committee member who was known to be “selling” houses in Unit P.

“After being on the list for 19 years, when I was told that there was an easier way to get a home for my children, I took it. I am still not in my house. Instead I am paying R700 for rental while being unemployed,” Gobe said.

Residents also complained about a number of unoccupied RDP houses which were being vandalised. Some members of the community resolved to occupy those houses. Bara said the extent of corruption in the area was extensive and he called on the state to intervene.

The DA has publicly declared its ambition to take power away from the ANC in BCM in the next local government election.

“It is illegal for people to sell government houses and it is also criminal for officials to collude and to rob people of their rights to housing,” said Bara.

BCM spokesman Samkelo Ngwenya said residents were making sensitive allegations and that BCM could not comment at this stage. — simthandilef@dispatch.co.za