The holding cells at the Kirkwood police station have been standing unused since May last year, according to information that was brought to my attention, diverting much needed police resources away from the communities they are meant to serve.

Vehicles now have to be dispatched to the Addo holding cells, over 40km away, to transport suspects.

This was confirmed after I conducted an unannounced oversight inspection at the Kirkwood police station recently, accompanied by Sundays River Caucus Leader, councillor Karen Smith.

When I inspected the holding cells, I found that the reason why they were out of operation was because the toilets and showers were not working.

How is it possible that nine months later, plumbing issues have not been repaired? The SAPS must ensure that the National Department of Public Works are tasked to rectify the problem as a matter of urgency!

I have tabled questions in the Provincial Legislature requesting clarity on what action is being taken to deal with this matter.

The consequence of these holding cells not being operational means that suspects that have been arrested, are handcuffed to a chair in the community service centre (charge office) while waiting to be transferred to the Addo holding cells. This has major security risks.

Police vehicles continually drive up and down between Kirkwood and Addo, taking arrested suspects to the holding cells there, or bringing them back from Addo to attend court.

The maintenance and fuel costs of this over nine months must run into tens of thousands of rands. Surely it would be cheaper to fix the problem?

This means that there are less vehicles available to attend complaints and visible police patrols are restricted.

A Democratic Alliance-led provincial government will ensure that we have a police service that is able to combat crime effectively and that they have the necessary resources to ensure that those who should be nailed and jailed are. 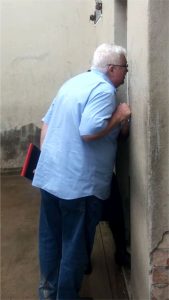 Caption: DA Shadow MEC for Safety and Security, Bobby Stevenson, inspects the holding cells that are out of order in Kirkwood.