The Eastern Cape Department of Health is failing the people of this province through a wilful disregard in providing the most basic care, and a complete lack of compassion for the sick, the dying and the family of those affected.

On the 11th of June, a Port Elizabeth woman waited for five hours in vain for an ambulance to transport her desperately ill brother to Livingstone Hospital. She eventually resorted to paying a private ambulance service to transfer him, and then was horrified to see her dying brother being forced to lie on a bed of such poor quality that it was not fit for human use. 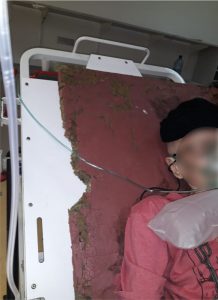 The woman begged the nursing staff to place her brother on a more comfortable bed, as the frame, which was far too short, was cutting into his legs. The staff ignored her completely. Although there were better beds in the facility, they refused to move him.

When the woman took photographs of the bed, she was accosted by a security guard who forced her to delete the images, but she had already sent one to her family. (See attached)

That security guards have been briefed to prevent photographs from being taken inside a public facility is a clear indication of a Department that has something to hide.

Several other visitors were sitting on chairs next to their ill family members, but when she sat on a chair she was told to get up as the chairs were for patients and not for visitors.

As a last insult, she was instructed to leave the ward when her brother was about to pass, and she could not be with him in his last moments. He died alone, after lying on that bed for eight and a half hours.

This despicable treatment of patients and their families is an indictment on the failing health care system in this province.

The Health Department is beset with challenges such as ongoing corruption at the highest levels, union interference in critical post provisioning, an almost entirely collapsed EMS system, protectionism and cadre deployment, all firmly rooted in Livingstone Hospital and proudly brought to you by an ANC government that cannot even get the basics right.

I have written to the MEC for Health to demand that a full investigation be done into this tragic incident and that those responsible for this shameful treatment of a dying man be brought to book.

In the DA-led Western Cape Province, health practitioners in state facilities practise ethical medicine and treat both patients and their families with compassion. The provincial government there ensures that properly qualified people are employed and that professionalism and kindness are the norm.