Phase one of first eco-friendly road in South Africa completed

The first eco-friendly road in South Africa, that incorporates waste plastic that would otherwise have gone to landfill or ended up in our oceans, has been completed in Jeffreys Bay, in the DA –led municipality of Kouga.

This amazing accomplishment comes two years after a motion by the Democratic Alliance to consider the implementation of a pilot project – to test the feasibility and practicability of building roads by incorporating waste plastic into the mix – was rejected by the majority of the members in the ANC-led Eastern Cape Legislature.

The ANC members vehemently objected and voted against the motion.

The Democratic Alliance believed in this idea as it presented a triple-win for the province. It could create thousands of employment opportunities for skilled and mainly unskilled people. It could make significant strides in preventing waste plastic from entering the ocean and threatening marine life, and it could address the R100 billion roads backlog in the Eastern Cape in a cost –effective manner. 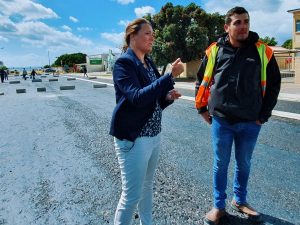 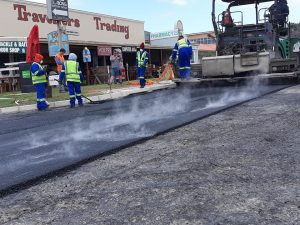 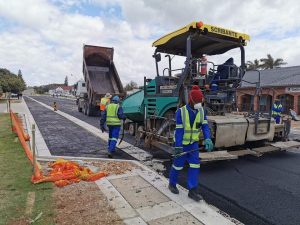 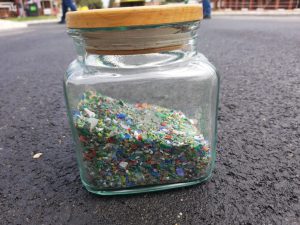 Kouga Mayor, Horatio Hendricks, agreed to run the pilot project in March of this year. Macrebur, SP Excell and Scribante agreed to complete the project of venturing into the future to build this road.

The first phase of the project has now been completed, producing a 300m stretch of road that contains plastic particles that are guaranteed not to leech into the environment, and which will serve as a benchmark in terms of road construction for the future.

The fact that the product from Macrebur is a non-leeching product is of critical importance, as the idea is to prevent further harm to the environment in terms of the life cycle of plastic, by creating a complete circular economy.

For every kilometre of eco-friendly road constructed 1.5 tons of waste plastic, the equivalent of 1.8 million plastic bags, will be used.

Phase two will see the completion of the 1.5km stretch of road, from the intersection of Koraal Street to Woltemade Street.

Following the completion of phase two, the focus will shift towards convincing other municipalities and provinces to make use of the technology. Should the technology be adopted, a processing plant could be established to recycle waste plastics for the roads locally, creating further job opportunities.

Governments from all over the world, contractors, engineers and the general public are invited to visit the first eco-friendly road in South Africa in Woltemade Street in Jeffrey’s Bay.

German and Chinese TV stations have already showed interest and have travelled to Jeffrey’s Bay to film the project.

The Democratic Alliance will remain the only party that is forward thinking, innovative and willing to embrace the fourth industrial revolution in moving into the future, creating jobs and embracing change.