The Department of Education is clearly failing to address infrastructure backlogs and in so doing, is failing to provide learners with conducive places of learning.

This was blatantly apparent during an oversight conducted at the Lutateni Senior Secondary school, in the Alfred Nzo municipality, which I visited last week along with constituency leader, Baxolile Nodada, MP. 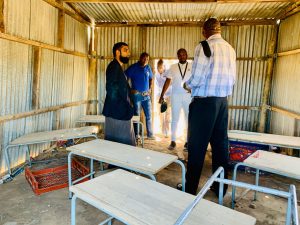 The school, which was established by the community in 1987, has severe infrastructure challenges, there is no admin office, no library, no staff room or tables for teachers.

Most notably there is a significant shortage of classrooms, despite countless pleas to the Department for assistance. The community, the bulk of whom have limited access to funds, have done their best to contribute, building temporary structures for their children to go to class.

This school, which is 30km from the nearest town, was visited by members from the National Council of Provinces in 2017 and promises were made that have not been kept.

In August the Department confirmed in oral questions that the school had been earmarked to receive three prefab classrooms in 2019/20 but said that these have been delayed due to budget constraints.

This is the same Department which failed to spend R110 million of their infrastructure budget in the past financial year.

The Department also sent a letter to the principal of Lutateni, explaining that four prefabs had been earmarked for relocation from the Zakhele Senior Secondary School, once that project had been completed, but stated that this project had been delayed due to the contractor having abandoned the Zakhele site, due to non-payment.

How can the Department plead poverty, then underspend its budget by such a huge amount?

Children across the province are being deprived of an education, while the money sits idle in the Department’s bank accounts, due to inefficient planning, blatant mismanagement and incompetence.

I will be submitting follow up questions to the MEC of Education, Fundile Gade, to ask for a progress report on the relocation of the four prefabs, and for clear timeframes to be given.

I will also be writing to the head of Infrastructure, Tsepo Pefole, to ask what the long-term plans for the school are, and whether provision has been made for a new school to be built.

Learners at Lutateni, and the hundreds of other schools across the province that are experiencing the same issues, deserve better.