Clean audits not the only marker of well-run municipality

There has been a strong focus recently on the latest audit outcomes of municipalities, and what this reveals about the state of local government.

In the Eastern Cape, 13 of the 39 municipalities audit reports worsened and only one received a clean audit. But is a clean audit the only measure of a municipality’s effectiveness, and does this indicate whether a municipality is succeeding in improving the quality of life of the communities it serves?

Achieving these three benchmarks is no small task! Doing so plays a huge role in preventing fraud, corruption and maladministration, and puts the municipality well on track to good financial governance.

However, good financial governance is only one of the yardsticks that should be used to determine whether a municipality is successful.

A wholistic evaluation should take into consideration the financial governance, political and administrative stability and, perhaps most importantly, service delivery and community satisfaction levels, which go hand in hand.

Based on an evaluation of municipal call centres, the top five service delivery issues identified are:
• Road infrastructure (Potholes and the general state of roads)
• Sewerage related issues
• Electricity supply
• Access to water
• General cleanliness of the municipality

Using these criteria, let’s compare the Senqu Local Municipality, the only municipality to receive a clean audit, and the Kouga Municipality, which received an unqualified audit opinion (meaning the financial statements were a true and fair representation, without any limitations, although some internal control mechanisms need attention).

The two municipalities are fairly similar in geographical size, have similar resources and budgets.

A closer look at Senqu, however, reveals that despite a clean audit outcome for five years in a row, the municipality’s service delivery track record is abysmal. Bulk infrastructure is collapsing, and residents are fed up.

The vast majority of this ANC-led municipality’s roads are gravel, with many severely eroded and near undrivable. Despite repeated promises by ANC councillors, nothing has been done.

The municipality’s sewerage systems are failing. Blocked drains and failing pump stations have resulted in backed up sewage overflowing into houses. Water and electricity supply infrastructure are heading the same route, with constant disruptions.

Public facilities have been vandalised, refuse is often left uncollected, and illegal dumping remains a concern.

In comparison, over the last five years the Kouga municipality has been making phenomenal strides in improving the lives of their residents.

Before the Local Government elections in 2016, the Kouga Municipality was heading the same way as Senqu, with failing infrastructure and maintenance backlogs. It was one of the worst-run municipalities in the Eastern Cape.

Innovative new technologies and solutions have seen Africa’s first eco-friendly road being built in the Kouga municipality, using waste plastic in the construction process. Over the past 12 months, over 14 000 potholes have been repaired.

Vast improvements have been made in upgrading the electricity supply network and water infrastructure, with drought relief projects high on the list of priorities. Additional boreholes have been drilled, while rainwater harvesting tanks have been provided to households, as drought conditions prevail.

In terms of general cleanliness, residents have a town that they can be proud of. The municipality has refurbished and upgraded public facilities.

The municipality’s willingness to think outside the box and their vision of driving innovation has put them in the spotlight, opening the door for billions of Rands of potential investment.

It’s not just about keeping accurate record of the money that is being spent, but about choosing where to spend the money. Ensuring that funds are directed to infrastructure, maintenance and ensuring that the public have access to reliable basic services is what truly sets a municipality apart.

A capable local government is the combination of good financial governance, political and administrative stability and a dedication to service delivery and community satisfaction. This is what sets DA-governed municipalities apart.

If this is the difference you want, you can change the status quo, but the opportunity only comes round once every five years, when you make your mark at the ballot box. 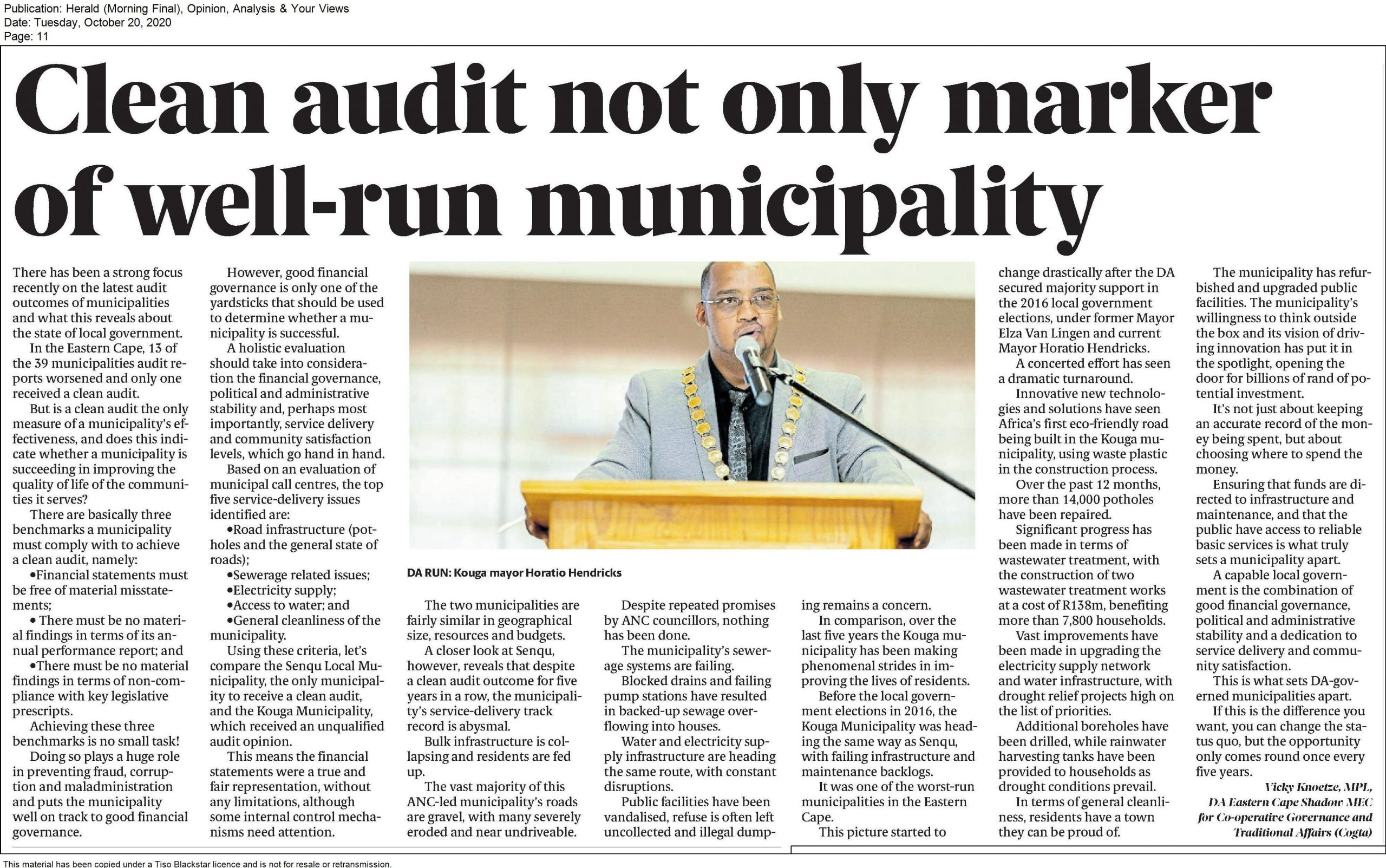