The ring-fencing of funds means the money is set aside for a specific purpose, in this case, to repay the ballooning debts to Eskom and the relevant waterboards, and cannot be used for anything else.

The Democratic Alliance has been calling for the ringfencing of funds collected from the sale of electricity, for years.

A capable state would ensure that key service providers are paid what they are owed, to secure the stability of basic services and a government that works.

This is not the case among Eastern Cape municipalities. The report shows that municipalities across the province collectively owed in excess of R2,6 billion. These creditors mainly consisted of bulk service providers such as Eskom and the Department of Water and Sanitation. The top five municipalities with the highest outstanding debt were Enoch Mgijima (R354,2 million), Walter Sisulu (R263,8 million), Raymond Mhlaba (R180,7 Million), King Sabata Dalinyebo (R232,7 million) and Inxuba Yethemba (R164 million).

The same report shows that 10 municipalities had negative cash balances at the end of the last financial year. 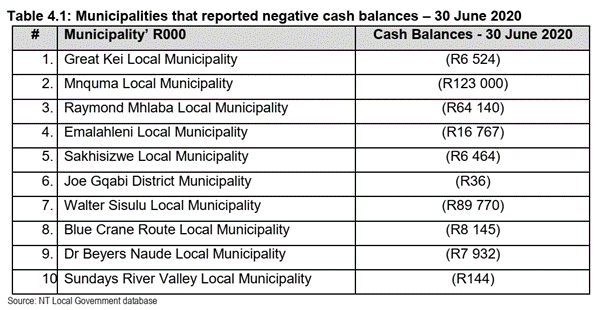 Eastern Cape municipalities have become used to using money from the resale of electricity to fund general expenses and salaries, instead of repaying Eskom, resulting in a ballooning debt crisis that is crippling local government.

Payment plans to service the ballooning Eskom debt are simply ignored, while residents face the threat of extended power cuts as Eskom cuts services for non-payment, despite having paid municipalities for their electricity.

Without water and electricity, towns will cease to exist. We are already seeing the mass exodus from our towns as businesses and residents relocate in search of better services.

I will be writing to the chairperson of the Standing Committee of Public Accounts, Veliswa Mvenya, to request that Finance MEC Mlungisi Mvoko provide the committee with a detailed response as to why the recommendations of National Treasury have been ignored.

The Democratic Alliance will not sit idly by while ANC-deployed cadres are given free rein with the public purse at the local government level.

With rampant unemployment in the province now standing at 47,9%, and local government collapsing, Eastern Cape residents more than ever require a government that is forward-thinking and innovative, which will rebuild the province and get it back on track.