The Democratic Alliance condemns the recent vandalism of the Steve Biko statue, outside East London City Hall in Buffalo City Metro, that has been defaced with paint.

The statue was unveiled by the former President Nelson Mandela in East London in 1997, to commemorate the contribution to the struggle towards liberation. Steve Biko was at the forefront of a grassroots anti-apartheid campaign known as the Black Consciousness Movement during the late 1960s and 1970s. 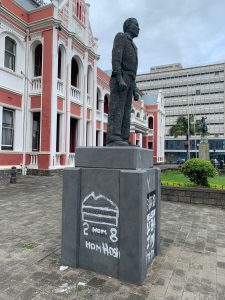 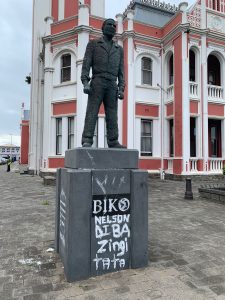 A capable state that is committed to national reconciliation and honouring its past, would never allow the neglect of icons such as Steve Biko.

We can’t be so busy wanting to change names in the interest of reconciliation that we abandon the contributions that have already been made.

It is common cause that as diverse humans we will differ in our views and what we believe should be remembered and what should not, whether this be through tangible or intangible objects. But we must not forget that the heritage of each individual is the heritage of the country.

As we celebrate Human Rights month, we must remember that ours is a nation of resilience, a nation that has a deep and tragic history that can never be erased nor forgotten by its people and the world.

We should never attempt to erase history from our history books, as it teaches us of where we come from, who we are as a people and to never repeat the mistakes of the past.

This shows how the department of Sport, Recreation, Arts and Culture (DSRAC) continues to fail in placing adequate measures for the safety and preservation of our heritage sites within the province.

I will be writing to DSRAC MEC, Fezeka Nkomonye, to request that a more structured plan in collaboration with municipalities, through DSRAC and COGTA, in how communities can be sensitised to our collective histories. There also needs to be a comprehensive set of guidelines relating to security measures around historical and cultural sites within the province.

All of us should work together in upholding, preserving and protecting our history which has shaped who we are as we seek to promote our diversity and creating a society with equal opportunities.