DA ramps up fight against corruption with Tender Watch

The Democratic Alliance in the Eastern Cape Legislature has ramped up the fight against the rampant corruption in the province, with the launch of a new hotline that will enable whistleblowers to provide tipoffs that will be followed up and acted on.

Today I was accompanied by the DA Leader in the Eastern Cape Legislature, Bobby Stevenson, MPL, and DA EC Shadow MEC for Finance, Retief Odendaal, MPL, in launching Tender Watch, which is targeted at exposing and ending corruption and tender irregularities.

To this end, we have established a dedicated email address TenderWatchEC@da.org.za and are appealing to the people of the Eastern Cape to rise up and assist us in bringing an end to the rot in our government.

We will ensure that all reported cases are treated with the utmost confidence, and ensure that whistleblowers are protected. 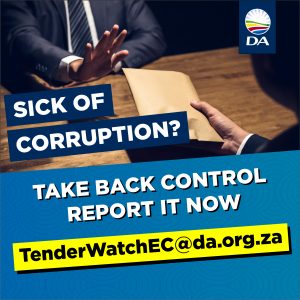 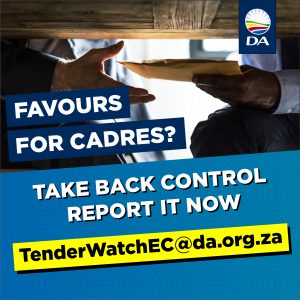 Corruption, cadre deployment and maladministration have crippled governance in the Eastern Cape.

Stealing from governmental departments and municipalities has become the easiest way of making a dishonest buck – more often than not without any consequences to the individuals involved.

The DA is uniquely placed to expose this kind of corruption, with 245 public representatives active across the province. We are represented in all municipalities, as well as in the Provincial Legislature and at Parliament. We also have access to a network of practising attorneys that can provide legal insight. We will use the channels within legislatures to expose corruption and will utilise other bodies, such as the Auditor-General, Public Protector and the Hawks to ensure those guilty are brought to justice.

The role of a robust opposition is extremely important to ensure public funds are spent in terms of complete transparency and accountability, and that the public gets value for money spent.

Theft from the government very seldom entails the physical loss of money, assets or infrastructure. Stealing from the government is rather facilitated through tender procurement processes, either by rigging the tender to favour a specific bidder, sabotaging other bidders so that their bids are unsuccessful, or using deviations to bypass tender processes and appoint the preferred candidate.

Non-compliance with supply chain management legislation and weak governance structures at the provincial and municipal levels open the province to abuse of the tender process. This creates the climate for brazen corruption and tenders for pals or contracts for comrades.

But we cannot do this on our own. We need the public to stand with us and say enough is enough. The public must take back control and report the abuse of public funds, which is meant for their benefit, not for politically connected cadres!

Corruption is paralyzing service delivery and stifling job creation. We have to do more to put an end to corruption in this province. This is the only way to build a capable state that can get things done.